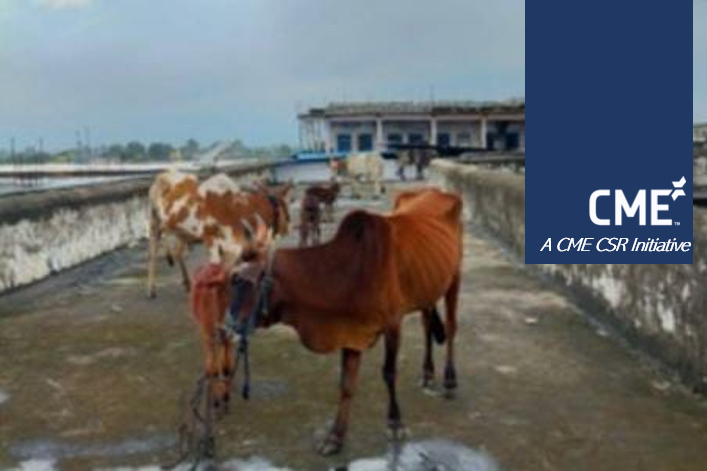 “Every Life Matters”. How Help Came from 450KM Away?

Media have widely reported the havoc caused by the recent flood in North Karnataka, which affected 35,000 people, 8000 of them lost their homes, and the state suffered damages worth more than 3000 crores. But many are not aware that there also have been hundreds of animals killed and displaced. Those animals, the majority of which are dairy cows - and as per one report, about 500 to 600 animals have died due to flood. Unable to escape, they were drowned in the water, and those who survived were left at the lurch of starvation. There was an extreme shortage of feed and fodder, and whatever was left were covered in mud - which animals could not eat. A cow eats 25 loads of straw, one load of silage consists of grass & other green fodder, and TMR (Total Mixed Ration). As the grazing fields were flooded, it would take 30 days for the grasslands to grow back. Lack of food resulted in illness and caused many more cattle deaths. Continuous rain and flooded roads further extended the apathy of those speechless animals as there was no connectivity to make the cattle feed reach them.

While animals were battling for life, the help came from an unexpected quarter of around 450 KM away in Bangalore through an SME organization, CME. When the news of animal apathy reached Praveen Crasta - CEO of CME, he immediately deployed the CSR arm in the affected areas, collaborated with CUPA (Compassion Unlimited Plus Action), and funded the program to ensure sufficient food and medical assistance reaches these animals. CME made a rapid action plan, and with local support, it was implemented with resounding success.

Starvation was the biggest concern for the rapidly declined health of the cattle during the flood. There was no adequate food supply, and logistics was a challenge. A healthy cow would eat 7-10 KG of TMR (Total Mixed Ration) every day or 5-7 KG of dry fodder every day. The local animal husbandry was grappling with the acute food shortage, and lack of connectivity delayed the fulfilment. Due to the lack of food, cattle started developing acidosis and other gastrointestinal problems. CME with CUPA assessed the ground situation at a local protective shelter for cows and immediately arranged 25 loads of straw, one load of grass & green fodder, and one load of TMR for each of the 300 cows in the goshala. The company also arranged clean drinking water for the cattle of 30-35 litres per day per cow.

Natural calamity uproots many lives, and often little to almost no attention is given to the poor animals who are far more helpless than humans. Floods and other calamities comes in every year, but with better planning, and management we could minimise and even overcome the loss. CME through organizations like CUPA, PETA are trying to give voice to the voiceless and believe we could save many more animals from unnatural death and make the world a better place.